It’s time for a change. I’ve been so focused teaching you how to grow certain plants as my patio garden is flourishing. There re so many blooms out there and more! I figured now is a great time to share with you my summer patio garden update for 2021.

I’ve been hard at work growing a beautiful garden in my patio since we moved here in December. I already had my roses, succulents, and some other plants, but spring was the time things really began to grow.

My husband added a bottom to the raised garden bed he built for me last yeaf. My parents gave us two raised beds that Dad made before they moved. I had a few smaller containers to grow plants in as well.

I love flowers and enjoyed making fresh bouquets last year, so decided to only grow cut flowers this year.

I planted several varieties of sunflowers, cosmos, zinnias, and a flower mix in my large raised garden bed.

Right now beautiful varieties of sunflowers in reds, oranges, and yellows stand tall in the back of the bed. The flower mix grew well when they first started blooming. Not much has bloomed near the middle yet.

In the raised bed my parents gave us, I planted carnation, flower, and several varieties of zinnia seeds.

These planters are currently overflowing with blooms. The carnations are growing leaves, but will take awhile to flower.

I have several pink and white iceberg roses growing in their own pots, as well as a hybrid tea rose, a pink miniature rose, and peach Drift rose. I just gave them all some fertilizer to encourage more blooms.

The iceberg roses are fairly easy to grow. My prized hybrid rose that blooms flowers in white and red has been fickle this year. It only bloomed one flower in the spring, then nothing!

After carefully looking the plant over, I realized that I had pruned it the wrong way. Once I cut it back correctly, it started budding and blooming like crazy!

Hopefully, I can repeat that to enjoy more roses for the rest of the year.

I keep adding zinnias to my garden, despite the lack of space. I bought several seed varieties to see which ones I would enjoy to grow the most. It is hard to pick just one because they all look so beautiful and add so much color to our outdoor space!

I have zinnias growing in the large raised bed my husband built, the tall ones my parents gave us, smaller containers, and in both the new balcony pots I recently bought.

I pick a few to add to my ever changing bouquet that I have on display on our dining table, which was also a hand-me-down from my parents.

I have a few varieties of cosmos growing in some of the raised beds and smaller containers. I’ve tried growing these with little success in the past from seed. The plants get really tall, but don’t bloom many flowers.

This year looks like that will be different, thank goodness! I have a few tall plants in the larger bed. One has already bloomed a large, pink flower, just in front of the sunflowers that are growing tall in the back.

I tried growing some of the candy cane cosmos, but only one bloomed and it was a small flower. Not sure what happened there…

Sunflowers are another type of fun and easy flower to grow from seed. While I do enjoy the typical yellow, tall sunflower, I really like finding and growing different varieties that bloom flowers in all kinds of colors.

I bought several mixed varieties that I have planted in the large bed and some smaller beds and pots. The ones in the large bed have grown nicely with colorful blooms in yellows, oranges, reds, and dark red, which almost look black.

These sunflowers don’t get super tall like others, but still are impressive at over 5 feet tall. They make great cut flowers, although they don’t last as long as my zinnias when cut.

I grew morning glories with success on a trellis we bought to add some color and design to our garden wall at our last residence. It was really fun watching the vines with their purple blooms climb up the trellis.

Our balcony wall is shorter, so we had to set up the trellis sideways so that it is now longer than it is high. My husband added supports to the top so that we can move it anywhere, but will stay in place, as long as there is room to drape the wooden supports over a wall.

Since we don’t have a dirt area on our patio I had to get creative to grow the morning glories on the trellis. I had bought several hanging planters at a dollar store to place in our first tiny balcony in our studio apartment. I placed all five in front of the trellis.

Once I had garden soil and the seeds in place, I just waited and hoped. All but one of the planters now has morning glories trailing upward on to the trellis.

I don’t know why one container didn’t grow any, but it is what it is. I planted some dahlia seeds in that one and hope to see some blooms from there soon.

I have huge marigolds in yellow and orange growing from one of the tall planters my parents gave us. I think they are from a flower mix I planted next to zinnias. They are pretty and much larger than I thought they would be.

If I plant this mix next year, I’ll make sure they have their own planter, since the marigolds are starting to overtake the zinnias. I still learn something new from my garden every year!

Right now, I have five plumeria trees in different stages of maturity. All of them are growing leaves, but only one is starting to bloom some flowers.

I have them all growing behind the planters. I love that plumeria don’t need much room to grow and need very little care once established. I hope a few more produce blooms this year. They smell so sweet and are so pretty!

I have two pink hydrangeas growing on either side of a large container my parents gave us before they moved. The hydrangeas add some color to the space around our window.

This container holds most of my gardening supplies and can also be used as an extra seating area when we have family and friends over.

I’m trying to change the color of one of my hydrangeas, so I recently added some of my husband’s coffee grounds to the soil. I hope it works!

Most of my succulents are growing on a multi-tiered shelf my husband made for me when we were living in our studio. The shelf is a great way to display many more plants than just on the ground.

I love growing succulents, since they need little care and come in many varieties.

I also have some other plants growing around the patio and near the succulents. We have a pygmy palm tree growing in a beautiful blue pot one of our neighbors gave us before we moved several years ago.

The pot is a pain to move because it is so heavy, but the small palm tree looks great growing in it, with its large, green leaves cascading down the sides.

While I do tend to change my mind at the last minute, I already have some plans for next year’s garden. I’m definitely going to grow more zinnias and sunflowers next year, since they are some of my favorite flowers to grow.

I plan on growing them in separate planters, since I found this year that growing too many varieties in one planter is not a great idea. One type of plant will flourish, while the others die quickly or grow small.

That is all for my summer patio garden update. I hope you enjoyed my tour of my small patio garden. What do you have growing in your garden right now?

Let me know in the comments section below!

Get Your FREE Garden Toolkit Here! 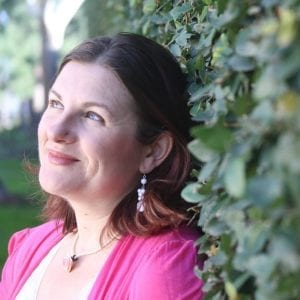 My name is Ann. I am a lover of God, flowers, cats, beaches, and my family and friends. Stop and smell the roses while you are here. And even learn to grow your own! Welcome to my blog! Read More…

Want more gardening goodies in your inbox? Subscribe to my monthly newsletter and receive some FREE garden tools! 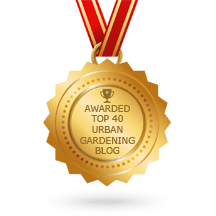 We are a participant in the Amazon Services LLC Associates Program, an affiliate advertising program designed to provide a means for us to earn fees by linking to Amazon.com and affiliated sites.

Get Your FREE Garden Tools Here!